Flashback Friday: 5 Lessons from the Tech World in 2006

Back in 2006, we were learning important lessons about how technology could be used – here’s why that’s still important. 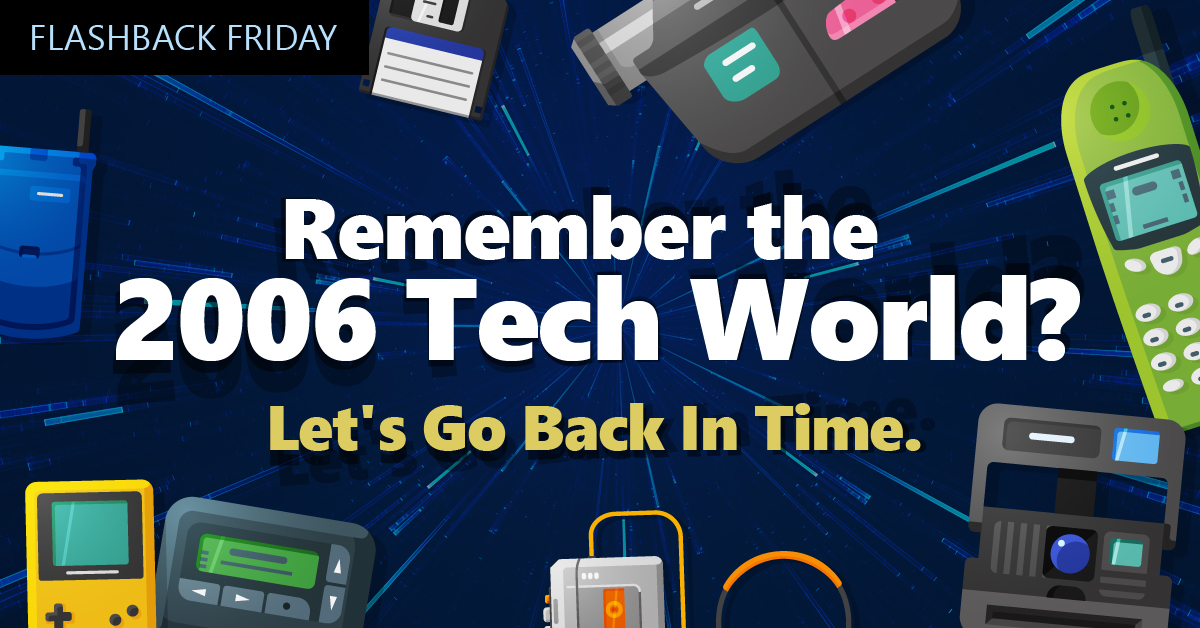 Let’s go all the way back to a decade ago in 2006. It was a year of new technologies, new services, and new understanding about just what customers wanted: Here are several of the top lessons we learned.

It’s Hard to Judge the Impact of New Technologies

While it may seem like the iPhone has always been with us, this revolutionary smartphone isn’t that old – in fact, it first debuted in 2006 thanks to the long-term efforts of Steve Jobs. It’s an excellent lesson in how hard it is to predict the impact that new hardware will have on business. In 2006, it was hard to imagine how a quirky, all-screen iPhone would change much of anything for anyone but diehard Mac fans. A couple years later, iPhones had transformed the smartphone industry and businesses were scrambling to find ways to tap into the market via apps, company iPhones, and more. Suddenly, Macs were more viable in the workplace than ever. If it happened once, it can happen again!

Another device made a big splash in an unexpected way in 2006 – the Nintendo Wii. You may remember it better as, “that game console where everyone was waving sticks around.” The Wii became insanely popular across many different age demographics, leaving people scrambling to find out why. The core of the attraction was simple: People like the interactivity. They enjoyed the sensors, the simplicity, and the ability to play by moving real-world objects around. This directly led to more interest in the Internet of Things, virtual reality, and how companies interacted with their customers.

The Cloud is Still Relatively New

Yes, 2006 was the year that Amazon Web Services first launched its cloud services, which were destined to change how businesses operated around the world. Companies were able to rent virtual space on one of the most popular business service sites in the world to outsource some of their data processes to a fully online format. Suddenly, new collaboration and cost savings were possible. Small companies saw newfound scalability, and large companies realized they could structure entire organizations around this. However, it’s still important to note that cloud services are only a decade old – that’s still a fairly new technology, one with a lot of room to grow.

Leaks Will Always Be Popular

Guess what else was established in 2006 – if you guessed “Wikileaks” then you are right on the money. Wikileaks was created to distribute private data, and it’s no surprise that most of its data has come from leaks and hacks of company information. People will always want access to private business information. If for no other reason, they’ll just want to know what it says. It’s smart to remind ourselves that this is the world we live in, and the trend is only growing more profound.

Hacking is About More Than Selling Data

Sure, making money is a goal for many illegal hackers. But more often than not, that’s not a reliable motive: Many just want to cause chaos. Take a look at the Kama Sutra worm of 2006, which was created simply to mess with people’s contact lists. No information was stolen, it was just ruined – but that’s still incredibly damaging to businesses. 2006 also saw new DDoS attacks and new DRM workaround software which, with similar “watch the world burn” goals. Just because your data is sellable doesn’t mean it’s safe!

Have questions about your {city} data and related security? Let {company} know by contacting us at {email} or {phone}.